Who are the winners and losers in Britain's new defense review?

LONDON — British Prime Minister Boris Johnson has delivered on his promise: A new defense, security and foreign policy review released March 22 calls for cuts to the Army’s end strength and aging hardware as well as the creation of new military structures and the acquisition of high-tech capabilities.

By the time Defence Secretary Ben Wallace stood up in Parliament to announce the outcome of the review, the fate of several key capabilities had already been leaked by the government over several weeks as it promoted the virtues that a data- and intelligence-driven military could bring to competing with potential adversaries like Russia, particularly in gray zone warfare.

In the government’s review, the Ministry of Defence committed to buying more than the 48 F-35B fighter jets it has already ordered, but the timeline for securing more of the aircraft is vague.

But older, conventional hardware in the MoD’s inventory took a hit as the military cut programs to better afford a pivot toward high-tech acquisitions in the fields of space, cyber, unmanned vehicles and artificial intelligence, among other advanced capabilities.

The Warrior infantry fighting vehicle and the Hercules C-130J military transport aircraft fleets are both being axed, while Typhoon combat jets and Challenger 2 tanks are being reduced in numbers.

Some of the takeaways:

The Airbus A400M will fill the gap.

Enter a valid email address
Thanks for signing up!
x

Sign up for the Early Bird Brief, the defense industry’s most comprehensive news and information, straight to your inbox.

By giving us your email, you are opting in to the Early Bird Brief.

Concerns across the pond

But it’s the cut in end strength that has caused controversy.

Joint Chiefs of Staff, told listeners on the BBC radio Monday morning that the cut in manpower will likely cause “huge concern “in Washington, particularly over Britain’s ability to sustain deployments.

That’s a concern other senior U.S. officials have voiced for years amid a shrink it British Army numbers.

Howard Wheeldon, an analyst at Wheeldon Strategic Advisory, said the cut would be seen as a big mistake in terms of U.S.-British defense relations. 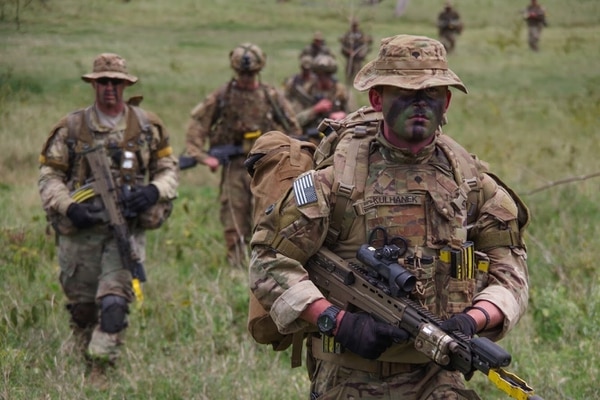 “The Pentagon has continually warned the U.K. government that if you expect to retain your current level of credibility, do not allow troop numbers to get any smaller.

But that is just what the MoD in its infinite wisdom has chosen to do,” Wheeldon said. “While our would-be enemies — the Russians and Chinese — are probably laughing, my big fear is that the Americans are shaking their heads with disgust.”

But that take hasn’t found unanimous support. The ability of the U.S. and Britain to exchange data is a more critical capability, according the retired Rear Adm. Alex Burton, who commanded British maritime forces and surface ships.

“The true risk to the U.K. and our relationship with our allies is that transformation doesn’t happen fast enough.

Two more frigates or four more infantry regiments will not make us a better ally or provide an edge between success or failure,” said Burton, now a senior executive with data technology firm Rebellion Defense. “If we are unable to network with our allies, particularly the U.S., if we are unable to exploit data, algorithms and intelligence with our allies, we will become as relevant as sail in the age of steam. Most worryingly, it makes us irrelevant to our adversaries.”

Talking to Washington-based reporters on Monday, James Heappey, armed forces minister, pushed back on the idea the review would result in a loss of capacity to work with its largest partner.

“I can’t think of anything that we currently do with the United States that we wouldn’t be intending to continue doing,” Heappey said.

“Most obviously, our commitments in Iraq and Afghanistan endure, so too our commitments to countering Daesh in Syria,” he added, using an alternative name for the Islamic State group. “There continues to be shared purpose in pushing back Russian influence in the North Atlantic, and that remains undiminished. But actually what I see is a set of up arrows, I see a set of up arrows in the Pacific.”

One area that could strengthen ties between the U.S. and U.K., he noted, is the creation of a new British Army ranger regiment, one modeled on the U.S.

The review plans for GBP120 million in investments over the next four years to equip that force, the start of which Heappey said should be “up and running” by Christmas.

The new unit “doesn’t just do training and advising of partner nations forces, but actually goes and trains, advises, assists and then accompanies them into non-permissive environments, which is exactly what the Green Berets are,” Heappey said. “It’s pretty likely that we’ll find Green Berets and Rangers working alongside each other in the same environments. Sub-Saharan Africa feels like the growing market. But actually there’s still plenty to be done in places like Iraq and Afghanistan as well.”

Is it all affordable?

David Richards have both decried the purchase of high-tech weapons at the expense of traditional conventional capabilities, which they argue are still needed to deter potential adversaries.

However, Burton thinks the government is heading in the right direction. “Information data and algorithms are going to be as critical as bullets, missiles and fuel in the next war. The review recognizes that,” he said.

“This is the most comprehensive and ambitious transformation of our armed forces in over a generation. Where it has been sophisticated is that it has laid out the aspirations and ambitions the U.K. has as a nation and capabilities we need to deliver on that,” he added. “Also, reading between the lines, the review has laid out an extraordinarily [paced] timeline of delivery, so I think defense comes out really well, but the hard work is about to begin.”

The details laying out the size and shape of the military follows last week’s publication of the first part of an integrated review across defense, security, foreign policy and international development aimed at setting out the country’s future policies.

The first part of the review said Britain intends to pivot its global efforts toward the Asia-Pacific region and increase its nuclear weapons stockpile.

While the defense budget remains significantly overcommitted — despite several attempts to address the shortfall — the MoD is attempting this new transformation from a better financial position.

“Where this review differs from earlier efforts is the MoD has the money — an extra GBP24 billion over the next decade. That is a bigger increase than defense has had for a generation. I don’t think the excuse now can be that there isn’t enough money,” Burton said.

The Johnson government surprised analysts, politicians and others last November by pledging to provide an additional GBP16.5 billion over the next four financial years to help fund the transformation effort.

Together with an annual 0.5 percent real-term increase in the defense budget for the six years following 2024, the MoD is likely to get an injection of additional cash totaling GBP24 billion over the next 10 years.

Some of that money will go toward plugging a financial black hole in the 10-year equipment program, which the parliamentary Public Accounts Committee reported last week could be as large as GBP17.4 billion — a figure disputed by the MoD, which put the figure at GBP7.3 billion.

Aaron Mehta in Washington contributed to this report.